For Mario Castelnuovo-Tedesco, meeting Ildebrando Pizzetti (1880-1968) was crucial to his development as composer, thanks to the elite status of the musician of Parma, who arrived in Florence in 1908 to teach harmony, counterpoint, and fugue at the Istituto Musicale “Luigi Cherubini” in Florence. Castelnuovo-Tedesco had no hesitation to leave the rigid, reactionary teaching of Antonio Scontrino for that of his new teacher. With his candor Castelnuovo-Tedesco also succeeded in smoothing over the conflict that blew up with Scontrino, who didn’t want to give up such a gifted student. The relationship of the young composer with Pizzetti had its ups and downs. In 1959 Pizzetti prevented the production of Castelnuovo-Tedesco’s The Merchant of Venice from taking place at La Scala. Initially, however, he was an enormous stimulus to Castelnuovo-Tedesco, both in terms of the beneficial effect of his teaching as well as for the fruitful opportunities to join the circle of intellectuals that gathered at Pizzetti’s home. Alternating rigor and creative freedom, the musical education of Castelnuovo-Tedesco was completed in the five years during which he studied with Pizzetti (receiving his diploma in composition at the Conservatory of Bologna in 1918): «If […] Pizzetti was very rigorous in his teaching of counterpoint,  he gave me full liberty in the practice of composition. I brought him my pieces, and we discussed them together, almost as equals, like good colleagues. He made his observations and razor-sharp criticisms, whether about the general concept or about specific details, then he said: "Think it over, and, if you are convinced about it, correct it; but correct it yourself!”  (Mario Castelnuovo-Tedesco, Una vita di musica (un libro di ricordi), edited by  J. Westby, Fiesole, Cadmo 2005, p. 90).

The first proof of Pizzetti’s confidence and consideration for his student was to entrust him to transcribe for piano the incidental music the elder composer wrote for the D’Annunzio’s play La Pisanella, to which Castelnuovo-Tedesco dedicated his first critical essay, published in “La Critica musicale” in 1919. The Mario Castelnuovo-Tedesco Collection at the Lyceum holds a copy of  the piano reduction of this work, signed by Pizzetti. 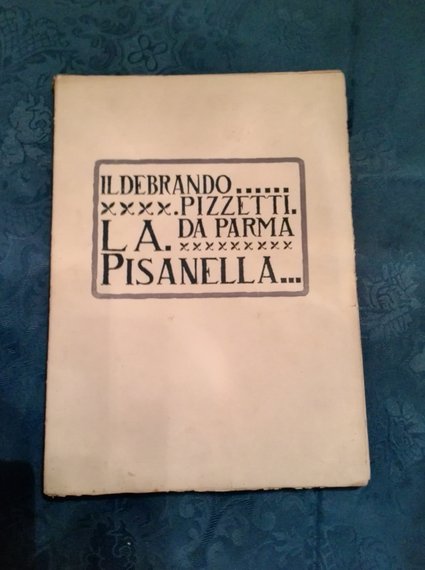 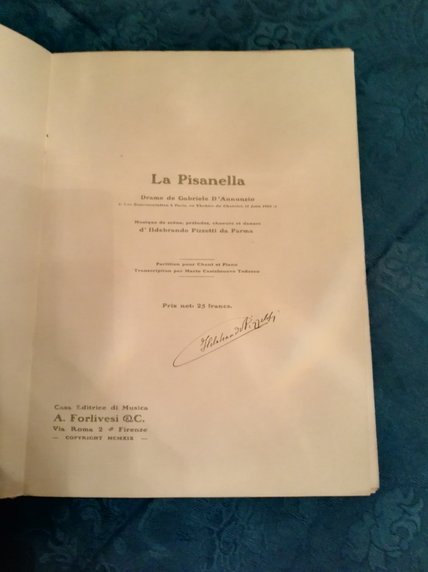