An exceptional violinist as well as a composer, Gioacchino (Giovacchino) Maglioni (1891-1966) studied in Florence and in Brussels, held concerts in Italy as well as abroad, and taught violin in Ferrara, Arezzo, Palermo and Florence. He partnered with  Mario Castelnuovo-Tedesco to present the latter’s chamber music in many concerts, including one at the Lyceum on March 21, 1919, when Castelnuovo-Tedesco, in the role of both composer and pianist, performed some of his recent compositions. The program included three works for piano: Il raggio verde[The Green Ray] (1916); Alghe [Seaweed](1919) ; and  “Questo fu il carro della Morte...”[This was the chariot of death],  (the second of the six novelettes of 1913); and, with Maglioni, Signorine [Young Ladies] (1918); and the premiere of “Stanotte son dormito a ciel sereno” [Tonight I slept under a serene sky], the second of the Tre canti all’aria aperta [Three Songs in the Open Air] (1919), which remain unpublished to this day. The program also featured four transcriptions for piano by Castelnuovo-Tedesco of Pizzetti’s incidental music for D’Annunzio’s play La Pisanella. The Maglioni-Castelnuovo-Tedesco Duo returned to the Lyceum on May 21, 1920 to perform more works for violin and piano by the composer-pianist:  Tre canti all’aria aperta, Ritmi and Capitan Fracassa.

The Mario Castelnuovo-Tedesco Collection preserves a work by Maglioni dedicated to the Italian soldiers who died in World War I, entitled  24 – 5 – 1915 (per la pace dei morti e degli eroi) . [24-5-1915 for Peace of the Dead and Heroes]. Published by Forlivesi. Florence,  n.d. 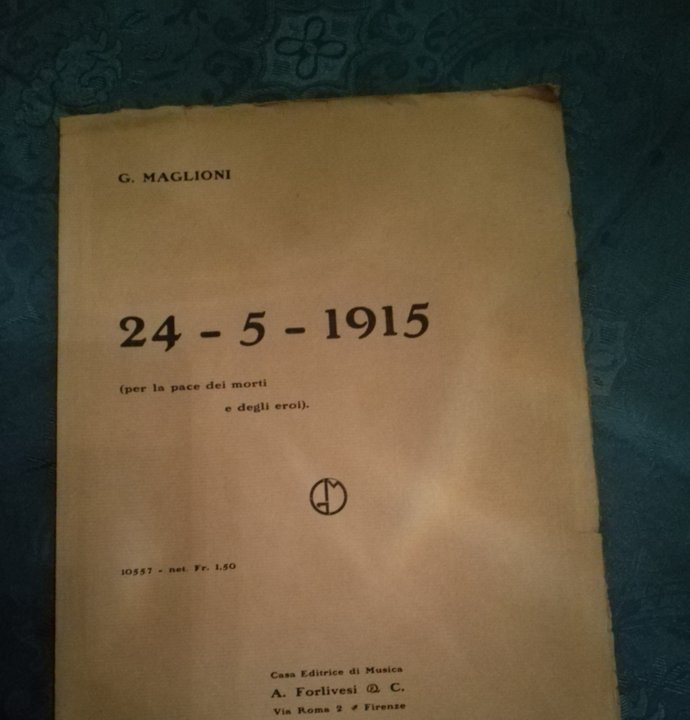